A group of ten people came forward and a lino-cutting and printing class began in February. Initially for four weeks but later extended to five.
The plan was to try out lino printing in it's most basic of forms and see where it led us.
Everyone had their own ideas and in due course a 'single colour' lino block was cut and printed. The group was quick to learn and printed their blocks on all manner of backgrounds with some excellent results, as well as just printing on plain white cartridge paper using a technique with the ink called 'rainbow rolling., giving a graded colour effect.All our prints were hand printed and individually made.
Our second block was a reduction method, printing several colours from light to dark, and cutting away the lino every time, resulting in the block being discarded after the final colour prints. This method involves printing an 'edition' which can be numbered and signed on completion.
Our last block will be based on a technique made famous by the Provincetown printmakers, who used flat wood, washed up on the shore from fish and fruit boxes, but lends itself well to use with softcut lino and can be coloured individually by hand with brushes and rollers, so each print can be unique.
There are other techniques and types of lino prints, but we did successfully cover the basics, and hopefully people will go on and develop their skills.
Margaret Cummins.
To see all our pictures in our Gallery please go to LINO PRINTING COURSE 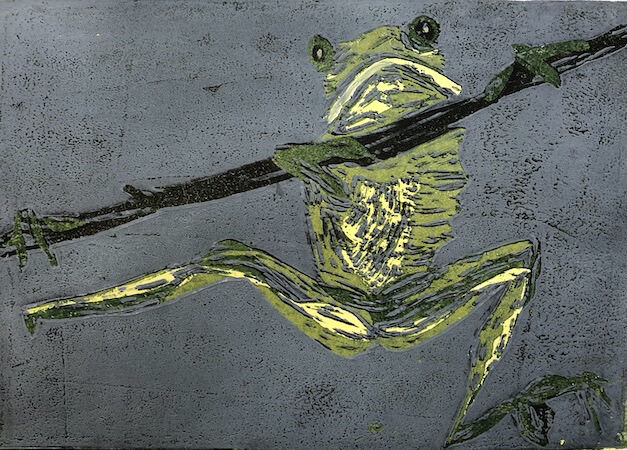 by Jean Boath
Next
Previous